Let's look at three main wide coverage options for Chico, CA, as well as peripheral devices and physical measures that can be undertaken to enhance each of these.

A long-held desire of surveillance users in Chico, CA and the industry alike, is for a camera that can see wide and telephoto at the same time. Now, that tool has arrived in the form of megapixel cameras.

Because of this capability, many regard it as the number one choice for securing large areas in Chico, CA.

Megapixel cameras are like a digital still photography camera, and feature a very high resolution with millions and millions of pixels. Such a high resolution enables any part of an image to be magnified many times to highlight minute details. Unlike digital cameras, megapixel cameras continuously take multiple images per second and are designed to do so 24/7, year after year.

The imaging capabilities of megapixel cameras make them ideal for covering large areas in Chico, CA such as parking lots, prison yards, and hallways. Live or recorded video from megapixel cameras allows the user to digitally pan/tilt/zoom to inspect suspicious activity.

In applications where the surveillance footage will not be monitored in real-time, this ability is especially useful to gather crucial evidence. 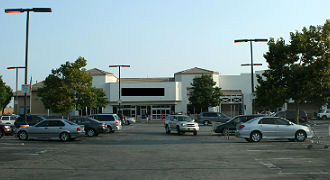 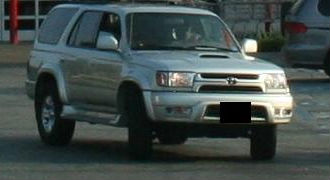 Some of the typical features found in today's PTZ cameras are: 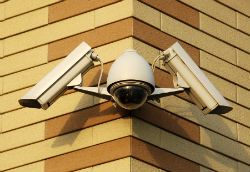 Along with the cameras themselves, housing and mounting options have improved. Housing options include indoor, outdoor, heating and blower units. Mounting options vary greatly but include pole mounts, wall mounts, ceiling mounts and drop mounts.

Although megapixel and PTZ cameras are now the primary cameras of choice for covering wide areas, fixed cameras still have a place in a comprehensive surveillance system.

For instance, in tandem with PTZs, fixed cameras can be trained on likely avenues of approach such as gates, parking lot entrances, and corridors. So no matter where other cameras are positioned, identification of who and what is coming and going is always documented.

Fixed cameras such as CS mount cameras allow for customization to meet special needs. As an example, most cameras with built-in optics are designed to meet short to medium-range needs. To cover a gate, say, 1,500 feet away will require a special telephoto lens that only CS mount cameras will accept. There are thousands of different lens and camera combinations to meet long range needs. 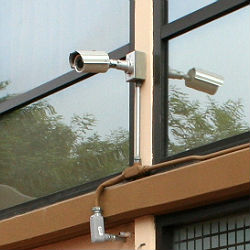 Additionally, fixed cameras such as bullet cameras are available with built-in long range infrared for night time use. Viewing distances up to several hundred feet in the dark is entirely possible and ensures surveillance 24/7.

Regardless of the camera option or combination of options used to meet your wide coverage needs, peripheral devices are available that will greatly improve reaction times to undesired activities and ease review of video evidence.

The latest aid to video surveillance systems is analytics. Video analytics devices are essentially micro-computers that watch the video for you and notify you of suspicious activity.

Activities in question could be: individuals crossing a virtual tripwire drawn by the user, loitering, items left (suitcases, backpacks, boxes), and items taken. Many of these devices also provide a people counting function which determines how many people entered an area and then left.

Most detection functions can also be set to only be active for a specific period of time and/or days. Using the people counting function, any count greater than zero after 11 p.m. could be considered suspicious activity. Once the device has detected activity, it can send emails or text alerts, or alarm outputs can be used to trigger a range of devices such as lights, sirens, and lift arms.

Security sensors have been around for many decades and most pre-date video surveillance technology. However, they are very reliable and inexpensive, and are built for specific purposes with a wide variety available. Some of the more frequently employed devices are:

One thing these devices have in common is an alarm output, which can easily be integrated into surveillance cameras and systems. A very common integration is linking one or more PIR sensors to PTZ cameras. PTZ cameras with alarm inputs can be programmed to instantly react to an alarm signal by repositioning itself to the area of concern.

Simple integrations like this are easy to do, multiply the camera capability and help to ensure a proper video record. 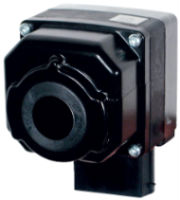 Thermal imagers aren't just for the local SWAT team. They also make fantastic companions for a video surveillance system and are perfect for use with video analytics.

Why? For starters, thermal cameras are not affected by light. So whether it's day or night, the image will remain relatively the same which is ideal for computer analysis.

In addition, thermal imagers are less effected by inclement weather such as rain and fog. Lastly, because they are detecting heat versus light, at a glance it will be easy to spot both people and vehicles even when viewing a wide area.

Although thermal imagers offer unique benefits, power requirements and video signals are identical to video-based surveillance cameras. Thanks to their increasing popularity, thermal cameras are available in a wide variety of forms including fixed cameras, indoor/outdoor and PTZ combinations that have both a video and a thermal camera built into one unit.

A security plan should not consist of technology alone, it should also be supported by physical measures. Considering the topic of covering wide areas, there are some simple tactics that will make a key difference in providing results and in some cases reduce the gear needed.

At the root of all tactics, is funneling traffic to specific points in order to reduce the areas on which cameras need to be trained.

In most buildings, this funneling to specific points has already been done by doors. However, for wide, porous areas such parking lots, open fields and larger interior venues, it's a different story.

Obviously, chain link fences or concrete walls could provide choke points but that would be costly and if you need them, you probably already have them.

Something to consider when choosing an effective but low cost option is how people go out of their way to take the easiest perceived route, take the smoothest route or take the route that seems proper. Banking on peoples habits, choke points could be added to a large field by planting shrubbery on the perimeter, leaving specific points free for traffic.

In the case of a parking lot, low curbs of asphalt, signs indicating entrances and exits, and painted lanes are all things that prompt people to take specific routes. These practices are subtle but they do work. When you're going about your daily routine, start studying establishments and I think you'll be surprised at how many properties funnel traffic all the time.

What Our Customers Say

"I had the Alibi system installed several years ago. It has functioned flawlessly. The image quality is exellent both night and day and in all weather conditions. I particularly like the replay (which can be set at various speeds) and zoom functions of the system. Tech support from Crimefreeliving has been excellent. I have received quick responses to questions, and timely home visits — as when I changed IP carriers and my Alibi system needed to be reset. I have recommended Crimefreeliving to several friends."

"As a small business owner here in Chico we definitely saw the need for video surveillance. After expressing our needs and concerns Tim did an excellent job getting us set up with the set up with the appropriate equipment. He really took the time to address our concerns in a very friendly, professional and knowledgeable manner. I highly recommend Tim for all of your business and residential video surveillance needs."

"I have to say I love having my security cameras at my home. Tim Truby did a wonderful job of installing the five cameras. He is very neat and cleaned everything up after the installation. He explained to me how to operate the monitor, my phone and IPad. However, I have had to call Tim because I'm not tech savvy and forget what he has told me. He usually just helps me over the phone and then all is well. I'm 80 years old and enjoy the comfort of knowing I have these security cameras."

"Tim Truby designed and installed a 32 camera system for us here at the Butte County Mosquito and Vector Control District. We had received several other quotes from security system vendors, but Tim’s quote was the least expensive. Tim also installed the system quickly and has always been available when we needed him. We are very happy with our security camera system and we can highly recommend Tim Truby for all of your surveillance system needs."

Crime Free Living updated our old video system with a new 16 Channel HD Alibi Video Security System. The old system had been added onto by different installers which resulted in a cabling mess. There were cables that worked and cables that went nowhere. It was a mess. Tim sorted it all out and installed cameras that are very clear. He also installed a monitor for our cashiers to watch hidden areas, a monitor to watch the entry door, and a monitor that allows employees to watch the outside parking and gas pump area. All work was done on time and very professional! Will always recommend Tim and Crime Free Living.

"I had Tim install an Alibi Video Security System at my residence and a couple business locations. The remote view option is invaluable to absentee owners or anyone who travels a lot. The clarity and quality of the cameras have allowed for viewing employee theft. The evidence provided from the HD video cameras was fantastic! Tim was professional and provided extra value from his law enforcement background."

"Tim, I want to thank you again for doing such a fantastic job on installing a wireless IP security camera system at our dream home. The extra time that you took to hide wires, and install a clean, professional system is much appreciated. I still can’t believe the clarity, quality, and ease of use of this new system. I wished that I would have met you before our original inferior system was installed by another company. Now, whether I am at home, or monitoring the system from around the world, I know that my home and family are safe and sound."

"In April of 2017, my husband and I made a phone call to Crime Free Living that turned out to be a smart and wise decision. Amazingly, in just a few hours, Tim installed four Dome Security Cameras, weatherproof enclosures, and hooked up into our home a 23" Full HD Widescreen Security Monitor. Even more than his professional expertise was the time spent with us in making sure that this system was working correctly and properly installed on our phones so that anywhere in our travels we can monitor our new home in Magalia."

"I have been using Crime Free Living for the last couple years ar work and at home and I really recommend this product. Tim is a very good service provider. If he can't figure it out, he's got good tech support with the system that he offers."

"I have known Tim for over 10 years. To date, Time with Crime Free Living has installed two separate surveillance systems for my company. With each system, Tim has listened to my needs and custom dsigned surveillance systems for my specific needs and within my budget. The equipment used is always state of the art, the workmanship is top notch, and Tim is the example of trustworthy. I would recommend him for any job."

With 16 years of experience in law enforcement, Tim Truby, CEO, is fully certified in video surveillance and training.